Time for a new tutorial… this time a glass bottle pendant. As you probably already know I love everything fantasy and this witchy and magical potion bottle has been and idea of mine for quite some time.

I really had fun making this although I felt like my fingers wouldn’t cooperate and I managed to glue my nail to the wire in the process.

What you will need

You will need a few things to make this, most of it you probably have already.

As I mentioned above I don’t know what the thing I used in the cork is called. If any one of you know then please comment below. It is the metal thing between the bottle and the bead cap. 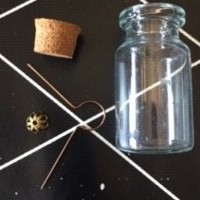 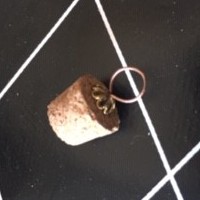 First of all you need to put the eye pin or screw in the cork. Remember to put the bead cap between the eye and the cork. If you use an eye pin, bend it one the bottom of the cork with the pliers and snip of the excess metal.

I tried putting nail polish inside the bottle and rotate it until it had covered as much as I wanted inside of it. However, when it had dried I noticed that it didn’t seem to look like there was some kind of potion inside, so I scrapped that idea and went on to the next.

To get the appearance of a thick liquid as the potion I mixed some corn syrup with a bit of food color and glitter and poured it into the bottle. Corn syrup can last forever so do not worry about it going bad. Then I just glued the cork onto the bottle and let it dry.

I actually didn’t do this until after I had started wrapping the bottle in the wire.

Now, your bottle are ready for the next step. 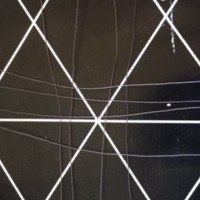 This is the part where I felt that my fingers wouldn’t cooperate with me. I started out crossing the wires on the table and hoped I could simply place the bottle on top of the wires and then twist the wires together.

In theory, it was a great idea, but of course it didn’t work and I had to do something else.

I cut 8 pieces of wire roughly 20 cm/8 inch long. I used a 0.4 mm/26 gauge wire and it was differently too thin and that came back to bite me in the ass later on.

I went on to adding one piece of wire at the time, twisting them at the edge of the bottle as they were added. 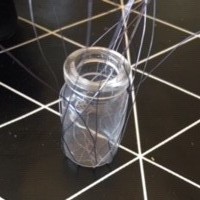 <– This is how the bottom ended up looking like

I know it’s not exactly pretty, but that’s alright because the end result will be. 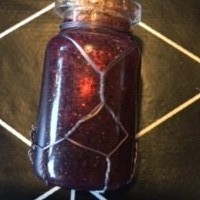 I hadn’t really determined a pattern before I started and I must admit that I never really have when I work with wire. I always go with a general idea and see how it turns out.

When I had twisted the wires at the first two points I could see that I had a big gap on each side of the bottle which is why I decided to go with a third twist and then wrapping the wire around the neck of the bottle to create the front. 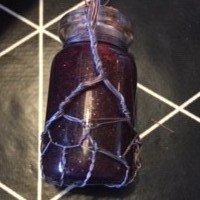 The back was a bit more tricky and I had a lot more wire strands to work with here.

I actually broke of one of the wire strands when I made a twist and had to repair that along the way. That is another reason that I recommend a thicker wire than what I used.

I brought in the wires in a third, fourth and fifth twist that gathered all the wire strands nicely at the top. 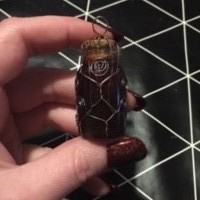 I was left with 11 wire strands and fed the middle one through the loop on the top of the bottle and created a spiral right under the neck of the bottle. I used a small drop of glue and held it in place with the pliers until the glue dried. 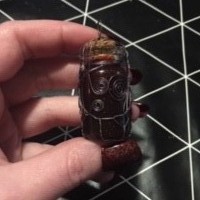 The next two wire strands was fed through the holes in the bead cap, down the front of the bottle and under the wires where I made spirals on both sides. I repeated this step on both sides with the fourth and fifth wire strand. 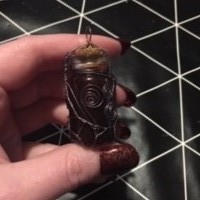 From the back of the bottle I did the same thing with outer wire strands on both sides.

I glued the spirals down on the bottle which is where I ended up gluing my nail to the metal because I didn’t use my head and pressed the wire onto the bottle with my nail. Not gonna do that again BTW.

The last four wire strands I cut down and twisted the ends around the stem of wires on the back of the bottle.

That’s it. How do you like my bottle pendant?

I would love to see your take on a miniature bottle pendant and other fantasy creations you have made. You can show me on Instagram or Facebook.