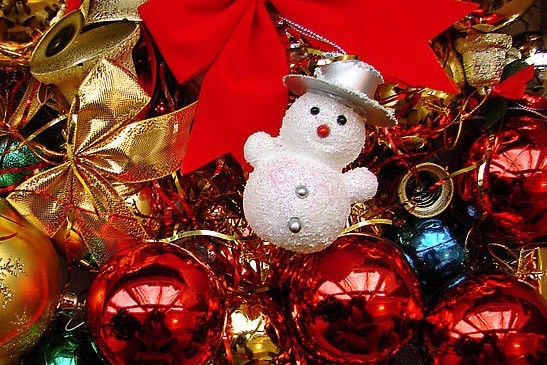 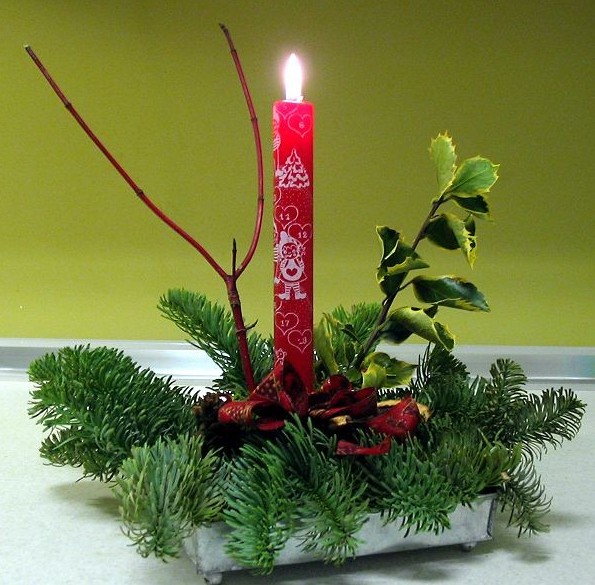 Some of our traditions require a bit of preparation, like our calendar candle. In almost every household in Denmark, we have a decoration with a calendar candle. The candle have numbers from 1 to 24. We light the candle every day and let it burn away one number each day til the 24th.

Danes are in general crazy about candle lights during the winter.

Another Danish Christmas tradition is Christmas calendar TV shows. First episode always airs on December 1st and last on December 24th. Typically, the TV show is about or with “nisser” (I will tell you more about “nisser” later). These shows are primarily made for children, but enjoyed by adults too. There are a few made for adults only that are on late at night when the children are at sleep. They are mostly for entertainment, but some of them have educational purposes as well. 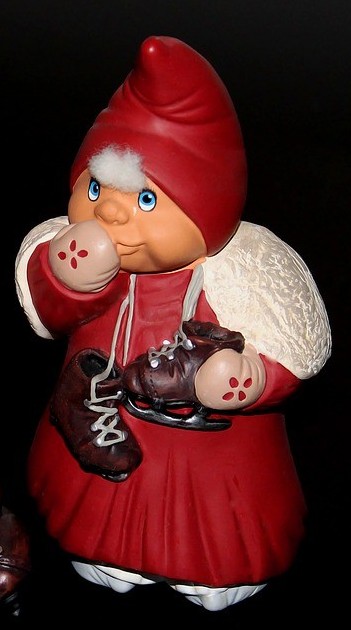 The Danish “nisse” is a small creature that according to Danish lore is living in our attics, basements, forests, actually pretty much everywhere. During most of the year they are wearing brown or green pointy hats and clothes, but when Christmas comes they wear red. They can be tricksters and hide things like keys and socks and so on. However, if we give them rice porridge with butter and cinnamon sugar they will behave. There are different opinions about how tall they are, but most commonly it’s said that they are about 30 cm or 11 to 12 inches tall.

I have heard them compared to Santa’s elves and gnomes, but they are not elves and they are not gnomes. They do not look like children unless they in fact are children, and they do not necessarily have beards. They do not necessarily help Santa at the North Pole (or as more commonly believed in Denmark, Greenland). It is actually very hard to describe what a “nisse” is, other that a cross between Santa’s elves and gnomes without actually being just that.

Every Danish child will know a “nisse” when they see one and they will not confuse them with other creatures. In Denmark, we grow up with stories about “nisser” and every Christmas we are bombarded with depictions of “nisser” everywhere. Most children even have a “nissehue” which is a red hat that looks like Santa’s hat.

Danes love “nisser” and we don’t like it when people call them anything but “nisser”. 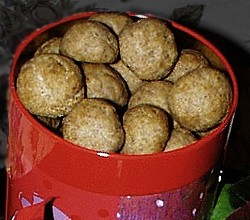 In Denmark, we have an insane amount of recipes for Christmas cookies and confections. The ones on the right is called “pebernødder”, directly translated to pepper nuts. There are actually pepper in them, but only a small amount, and they have nothing to do with nuts at all. They taste delicious. Among other common Christmas cookies are “brunkager” (brown cakes), “jødekager” (jew cakes) and “fedtebrød” (grease bread). All of them are really tasty even though they have crazy names.

We spend a lot of time baking and making confections during Christmas and among the confections there is “havregrynskugler” (oatmeal balls), “marcipansnitter” (marzipan chops/bites) and “tændstikker” (matches). 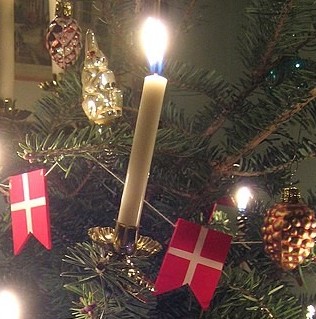 We often use Danish flags to decorate our Christmas tree along with small paper drums. As a tree topper we use a star to symbolize the star over Bethlehem.

We also decorate with Christmas hearts and cornets where we put sweets like “pebernødder” in. Sparkelers are not uncommon on the tree as well as “knallerter” which is a cardboard tube wrapped in nice paper where you can pull in both ends and it gives a small pop and confetti comes out (we also use them at new years).

We “dance” around the tree while we sing carols. When I say “dance” I really mean walk around, holding hands. 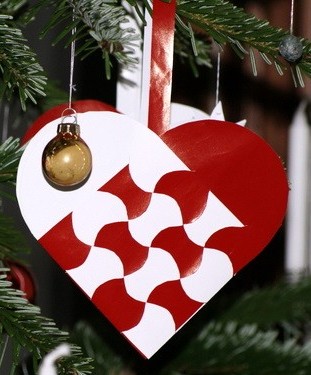 As mentioned earlier we decorate our Christmas tree with Christmas hearts. They are braided hearts made with gloss paper (other types of paper can be used), that create a small basket where you can put sweets.

The design can be really simple or really intrigued. I plan to make a post about these beautiful hearts to show you how to make them and give you a template to work from. They aren’t difficult to make unless you go for the intrigued ones.

I hope to make one with Mickey Mouse, if I can make it work (I can’t promise anything. It will be my first attempt to make a template myself).

Update: I made a few heart templates that are free to download. You can find them here. I also made a description on how to braid the hearts.

What we eat on Christmas eve 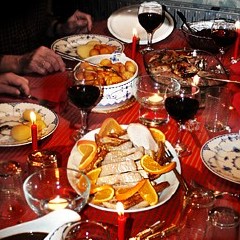 Danes love to eat, and when it comes to Christmas, the more the better is the usual mantra.

On December 23th a lot of people eat hot rice porridge served with cinnamon sugar and a small ball of butter on top. It tastes really well and it is practical because we need the leftovers for the dessert, we eat on the 24th.

The most traditional foods to eat on the 24th are pork roast and/or duck roast with boiled potatoes, candied potatoes, brown gravy, pickled red cabbage and salted chips.

For dessert, we eat “Risalamande” which is a cold rice porridge mixed with whipped creme, sugar, chopped almonds and vanilla. It is served with a hot cherry syrup on top. We hide a whole almond in the “Risalamande” and whoever finds the almond gets a small gift. The gift is often a small box of chocolate or a marzipan pig.

When we have eaten it is time to open the gifts. Yes, we open the Christmas gifts on Christmas eve the 24th and not Christmas morning the 25th. In my family we make sure to put the gifts under the tree on the night of the 23th so all the gifts are there on the 24th. That way the small children in the family, who still believe in Santa, thinks that Santa was there when they were sleeping.

That is the basis of a traditional Danish Christmas and I will of course make sure to give you recipes and DIY tips during Christmas.